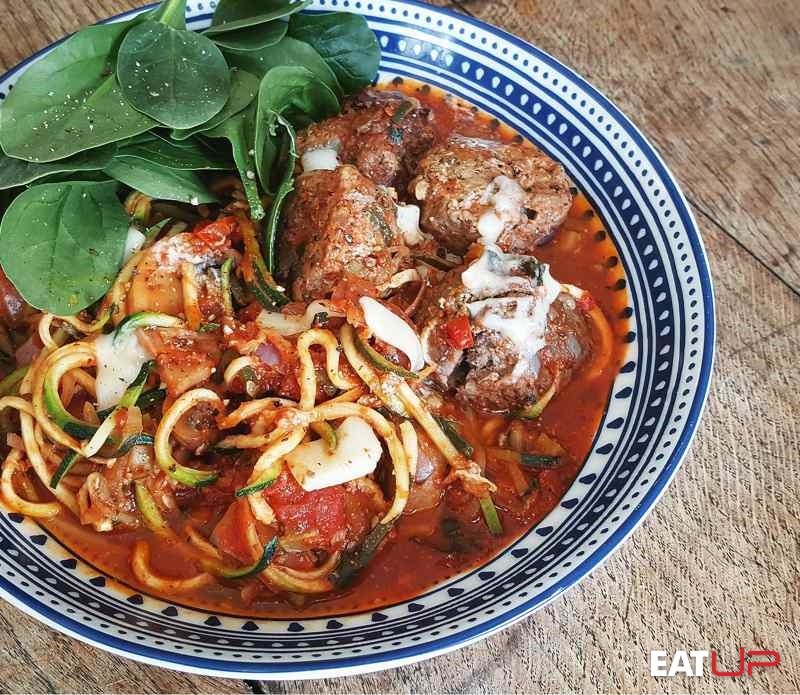 One of the biggest fat loss diet mistakes people make is eating too many calorie-dense foods.

Refined and highly-processed foods like pizza and ice cream are very calorie dense and low in protein.

This means that a relatively small amount of food in terms of serving size will take up a large percentage of your daily calorie allotment.

Eating most of your calories in one sitting may taste great in the moment, but can cause big fluctuations in your energy levels and leave you feeling hungry later in the day.

Food substitutions are a pain-free way to cut back on calories without reducing the amount of food you eat.

Here are our top five food substitutions that you can use to slash your calorie intake by swapping out high-calorie foods for lower calorie alternatives.

High-carb pasta, while delicious, isn’t the best choice when it comes to hitting your macros and sticking to a fat-loss diet.

Spiralising vegetables is a great way to create a spaghetti-like texture of food that you can eat more liberally and guilt free.

Courgette would make the best choice as it is a green vegetable that is low in calories and absorbs flavours well. I would recommend using courgette in place of noodles, as spiralised courgette is most similar in texture to this when added to a stir-fry.

Butternut squash would be a good alternative, although you should portion this out as butternut has a higher calorie and carb count than courgette.

Nevertheless, butternut squash offers a texture and taste most similar to spaghetti and is best cooked in the same way, just for much less time. Two to three minutes in a pan of boiling water will sufficiently cook the butternut to an ‘al-dente’ texture.

Spiralised vegetables are also a really tasty addition to salads and don’t necessarily need to be cooked. Beetroot, butternut, and courgette spiralise well and are all delicious raw, adding a lovely crunch to any salad. 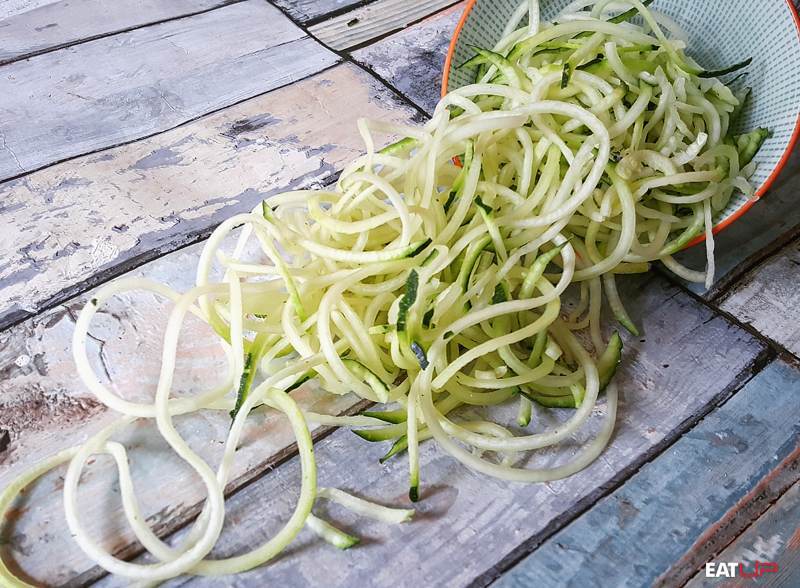 Many supermarkets now stock chicken and turkey sausages, which can be good alternatives to traditional pork sausages that can often contain relatively large amounts of dietary fat.

Turkey and chicken sausages typically contain less fat and therefore fewer total calories. However, be careful not to overconsume them (several servings per week), as like most processed foods they contain a relatively large amount of sodium.

Rice is a delicious carbohydrate source that has been a staple in many diets for years. However, when following a nutrition plan there may be some limitations on how much you can have or how frequently you can eat it.

Therefore, cauliflower rice is a great lower-calorie alternative that is also much lower in carbs, and as a cruciferous vegetable, it contains an array of vitamins and minerals like vitamin C, vitamin K, folate and sulforaphane.

To make cauliflower ‘rice’, simply blend a few florets of raw cauliflower in a food processor, with a small handful of fresh parsley and a pinch of sea salt and black pepper. To serve, simply stir-fry or steam for two to three minutes and enjoy as you would a portion of rice. 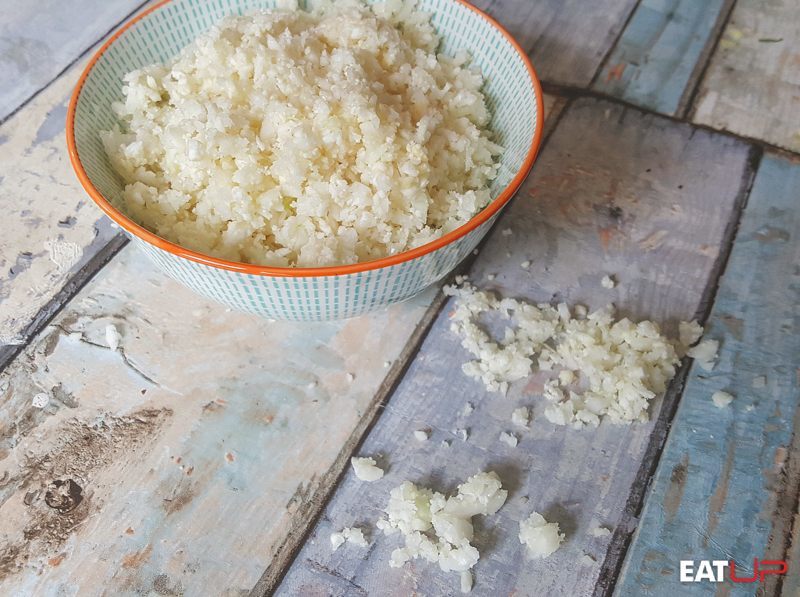 A word of warning before we get started with dark chocolate. There are many sources that will suggest that dark chocolate is a ‘health food’ or even a ‘superfood’ that can benefit your health.

While dark chocolate is a better choice than regular milk chocolate, it is still calorie-dense and should be consumed in moderation. If your self-control isn’t the best around chocolate, then avoid it all together.

However, if you want to enjoy a little chocolate with minimal damage to your progress, then dark chocolate is the way to go. When choosing a dark chocolate, aim for one that contains at least 85% cocoa solids and that lists sugar as far down the list of ingredients as possible.

A top tip would be to grate a small portion into Greek yoghurt or even to melt a square for dipping berries. 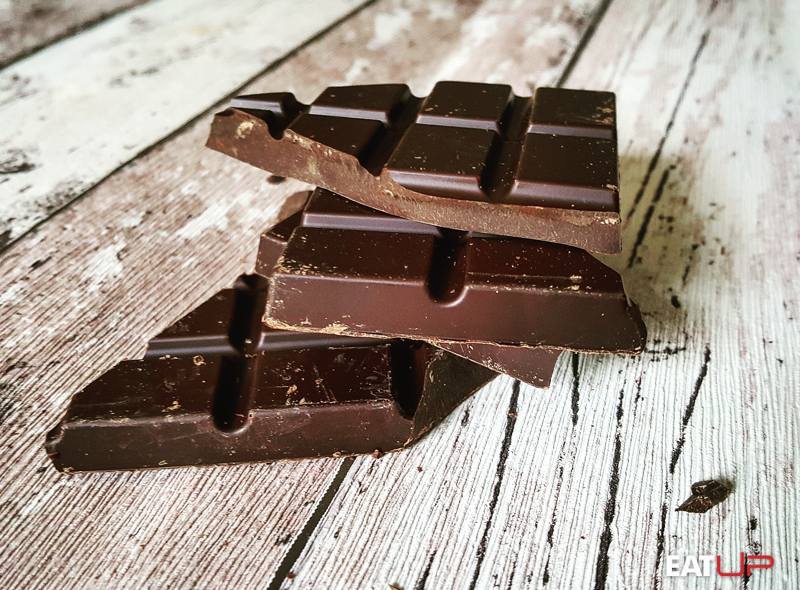 If you’re not the owner of a non-stick pan (highly recommended!), then you may tend to cook your foods in oil, to help with the cooking process and to avoid foods fusing to the bottom of the pan.

Oil can be beneficial to your diet, however, a tablespoon of olive oil is around 120kcals and so a generous serving in your pan can quickly add up.

Instead, grab a spray bottle and decant your oil into that, to help control portions. Most supermarkets also stock ready-to-use bottles of cooking sprays, which are 1kcal per spray. These are great for keeping your pan greased and your calorie intake controlled.

If you want to take your nutrition and fitness to the next level, get in touch to find out more about our life-changing Personal Training Plans, using the form below.